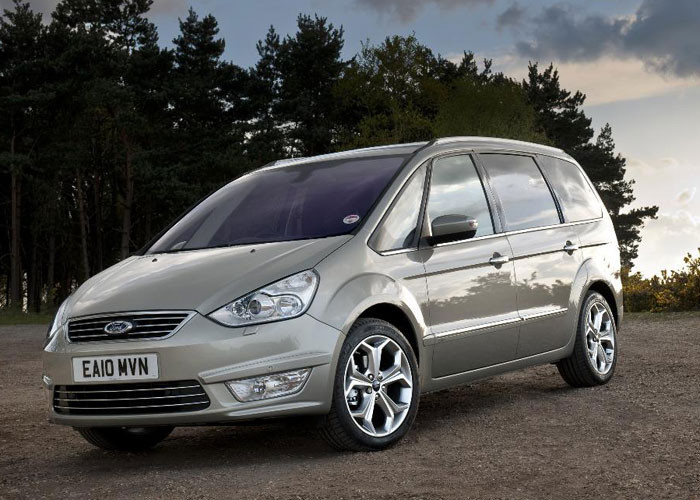 About the Galaxy The Ford Galaxy is a roomy, 7-seater people carrier with plenty of safety and drive-assist features. The latest EcoBoost petrol engine uses a combination of direct fuel injection and turbo-charging to deliver improved levels of power and fuel economy.
Galaxy Problems By Model Year
Galaxy Latest Problems
Noise
4 responses

Bought, somewhat begrugingly, after the birth of our 3rd child meaning I had to p/x my beleoved Saab 9-5 Hot Aero and I'm actually pretty impressed!
Its comfortable, offers reasonable performance and reasonable fuel economy - I'm getting around 40 mpg from the diesel and I'm not exactly a gentle driver: I have heard from a colleague that the petrol versions are thirsty though.
Ours is Zetec spec and trim / toy levels are adequate, it seems well made and is kid proof -everything wipes down easily and the flat floor makes cleaning it very easy. My wife particularly likes the front pasengers seat ability to be turned through 360 degress enabling her to turn round and feed baby in her car seat whilst looking directly at her. If you have kids it is very versatile : we have changed nappies, fed them and re-dressed them all done with space to spare, although there is little boot space with the back two seats in place - we have one removed which offers slightly more space for pushchairs etc.

Complaints? There is a blind spot that takes some getting used too and it is big meaning parking can be awkward.

Would I reccomend it? - Yes, if you have three or more kids
Would I buy another? - Yes

When you look at an MPV you think of words like; space, practicality and utilitarian. But don’t be fooled. On spending a bit of time with one, I found it hard to justify the Ford Galaxy’s “multi purpose” credentials.

With the back seats in place, for instance, there is near enough no boot space at all. And I wouldn’t be in any hurry to put anyone in the back two seats anyway, because they sit far too close to the fifth door, the head restraints virtually touch the rear window. Take them seats out though, and what are you left with? Five seats and a big boot. Or a bigger, more expensive, Mondeo, as I call it.

It’s not all bad though. The seats and driving position have obviously been designed to allow you to eat away the miles in as much comfort as possible. And for a taller, high centre of gravity, vehicle it does drive well. The 4-speed automatic gearbox is pretty smooth too. But the combination of the automatic gearbox and 2.3-litre petrol engine, in a car that weighs 1.6 tonnes, does have a drastic effect on the fuel economy. The figures say you can expect to get 25mpg, but after a full week I could only manage a wallet crippling 16mpg. I did manage 40mpg in the manual 1.9 diesel though, and the performance isn’t far off that of it's petrol counterpart.

The Galaxy is a comfortable cruiser, but if you’re planning to buy one ask yourself the question; do I need the space? Because if you don’t the Mondeo is the more sensible, cheaper option.

Add a review for Ford Galaxy